I am a musician, performer, songwriter, writer, collector of found objects, and an all around wild being. I hold a doctorate in Sustainability Education and am Founder of a company called Guiding Song, which gives people the opportunity to experience the creative process of composing a song from their own story.

I have been circling the globe for a couple of decades and have recently put down roots in Brussels, Belgium for the past several years. During this time, I have been writing music with refugees and asylum seekers in a project called “Songs of Migration”. Learn about these songs here. If you are interested in supporting the Songs of Migration project, you can do so by visiting my GoFundMe fundraiser. 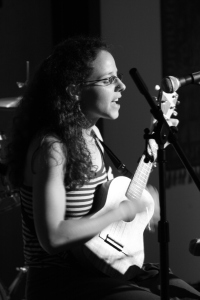 I first discovered writing as a free form, fluid method of meditation through the written word. This was the first avenue I began using on a regular basis for creative expression. Another form of expression I discovered since becoming a writer was in the creative method of musical composing.

I have been drawn to music since I was a young child, and I studied piano in the classical music tradition for 13 years. After my first in college, I grew disenchanted with the rigidity of the classical music world and stopped playing music altogether for many years.

I was drawn to return to music in the fall 2010, when I was introduced to a world of musical composition where I could be truly free in my choices for creative expression. It was around this time that I was also introduced to the ukulele at a writing conference during the summer 2010. Both the instrument and the method were integral to my return to music after many years away. In October 2011, I adopted my first ukulele and began working with a fellow member of my doctoral cohort at Prescott College. My fellow student had begun composing music from spoken stories as a means of overcoming periods of creative block, and in our work together we gave this method a name: Story-to-Song (STS). My relationship with the ukulele was different from my childhood romance with the piano. I felt more self-aware and more free to express to fully express my true Self. It is also far easier to travel with a ukulele, and it has thus become my constant companion for songwriting workshops and performance around the world.

While I continue to love the catharsis and meditative reflection I experience when I write, I find the process of composing a song from a spoken story to be transformative in a different way. I often write when I am feeling down. The act of writing helps me find meaning from what I am going through; however, it does not generally lift my spirits. For reasons I am exploring in my dissertation research, the process of writing songs from stories helps me to create moments of sustainability where I am able to transcend whatever dour emotion may have hold of me to a place of calm and often of profound joy and confidence.

To learn more about my music, visit the following sites:

Marieke in the Media